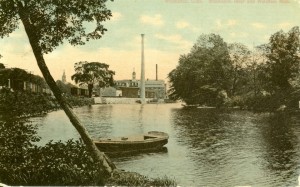 A view of one of the old smoke stakes over the river dated 1910. Courtesy of The Windham Textile & History Museum

Willimantic has always been a mill town. The city based its entire development on the various textile industries which were built by various entrepreneurs that have come through the city and settled down. While the town has always prided itself on being based on such a successful industry many people in the early twentieth century worried about the effects the industry had on the community. In 1910 many people wanted to go back to agriculture as the main method of gaining capital for the surrounding community, in order to discourage further immigration.1 The xenophobes were unsuccessful in their attempts to make Willimantic a Connecticut farming community once more. During the first 1900′ experienced a massive increase in its silk sales and manufacturing.2   Not even the Great War was able to hamper the production of the silk city. The town was able to attain relatively inexpensive silk and turned an unbelievable profit.

With the prophets the textile industry was making during the tail end of the nineteenth century, Willimantic was set to accomplish great things, one of which was the creation of its normal school. Before the city of Willimantic could build a school, the city first had to deal with the surrounding cities. Cities like Norwich and Stonington with a higher socioeconomic standing in the state were forerunners and heavy competition for Willimantic.3 Even though Willimantic was a very prosperous city at the turn of the century, it had great difficulty attaining the necessary funds needed to support the Normal School Exterior building a normal school. Willimantic found a savior in the Windham Manufacturing Company. The company provided the funds needed to push the state of Connecticut to give Willimantic the normal school. The Windham Manufacturing Company owned a great deal of land throughout Willimantic and decided to donate a portion of its land, located on Valley Street, to the town in order to build the normal school.4

If you are interested in learning more about Willimantic’s textile industry you can visit the located on 411 Main Street, Willimantic, CT. If you are planning to visit the Windham Textile & History Museum you can follow the link to their website.