“Up the hill and down Sodom.” 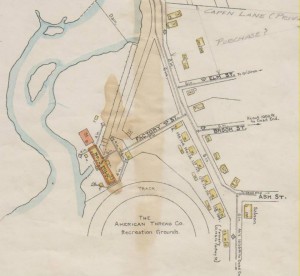 Mill no 3 with the Sodom district to the right.(Windham Textile & History Museum Collection)

In the early twentieth century Willimantic was a hub of economic opportunities that attracted a variety of different people, all searching for a place to earn a fortune or at the very least find a place in the booming textile town to work and live. Between 1900 and 1920 the population of Willimantic increased by 3393 residents.1 Most of these individuals were immigrants, hailing from Ireland, France, and Eastern Europe.2 Throughout the years of the Great War and the first quarter of the twentieth century, there was a massive crusade against  alcohol. When there is a crusade there is a need to find a scapegoat, there were plenty of scapegoats found peppered throughout the district known as Sodom.The tongue-in-cheek moniker was given to the area by locals in the late nineteenth and early twentieth centuries after an influx of immigrants began poring into the neighborhood.3 Illegal pubs and distilleries began to sprout up all around the immigrant district during the late nineteenth century and early twentieth century.4The issues that began to emerge in the immigrant district were not simply seen as a minor nuisance by the people of Willimantic eventually quarantined in a small location in town. As the years passed more and more of these immigrants became an integral part of the community in the context of the mill industry and the normal school. The teacher’s college was under scrutiny by the town and the state of Connecticut and had to find a way to acclimate and educate its teachers to this new set of English language learning.