Eastern Connecticut State University was and still remains a school for teachers. While the institution has diversified its curriculum it continues as one of the leading schools in New England for training teachers. Teachers during the Great War played a very important part in pushing patriotism among the youth of America. With the fear of an encroaching German invasion coming to the shores of the east coast, schools encouraged teachers to prepare their students for the worst. Many documents used by the educators at the Willimantic Normal School were lost, however, those sent off by the Connecticut Board of Education were not and are still available today. Documents, pamphlets, and a variety of materials discuss the Board’s expectations for teachers  from 1917 to 1919 and were sent to teachers all over the state. The student teachers at the Willimantic Normal School had the bulk of their lessons saturated with the materials sent by the Board of Education.   What can be seen through the analysis of this material is that the American way is the focus of the day and the need to pursue a nation that was protected by the threats of an overseas invasion. 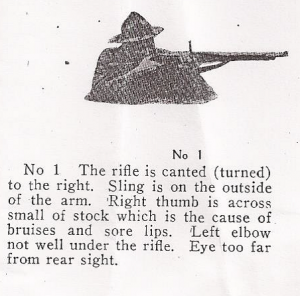 Giving children an intense zeal for their country is dangerous enough without helping them learn to fire a rifle.

The Connecticut State Board of Education gave teachers an outline on curriculum that would help students understand why the war started. The breakdown of the curriculum followed major historical events that lead to the formation of the then present day Germany. The Board made it evident that the German’s need for power was fueled by their alliance and close relationship with the Catholic Church, another group that was widely discriminated against in American history.1 The Board made this discrimination evident when in the manuals section on German history they stated that, “They strove with the pope for absolute control over religious matters. In this they usually failed. However their ambition knew no bounds.”2 The language is quite disturbing; making the clear instigator and aggressor in each and every conflict  Germany. The Germans were portrayed as a power hungry whose flaw throughout history was their need to control everything around them.  Connecticut schools taught that the Germans usurped the throne of the Roman Empire and destroyed was left of its former glory.3  The manual states that it “remained in this condition and with no law except that of the fist.”4 Other ethnicities discussed within those selected readings were portrayed in a relatively positive light. In one section relating to the Russians, the manual goes on describing the political turmoil in Russia as stemming from a number of different sources all of which were not centered upon a predisposed nature that is engrained within the ethnicity.5 To blame such an all encompassing war on something like the supposed predisposed violent and greedy nature of the German people is quite a .

The years between 1914 and 1918 were a tumultuous time in New England. Men were leaving overseas leaving woman and children behind to defend the home front.  The fear and paranoia of the day bled into every aspect of life.

Militarism in Connecticut schools was surprisingly extreme. The Board of Education sent manuals to the school systems around Connecticut giving specific instruction as to how teachers should prepare students for a possible military conflict. The physical education course at the school consisted of many military oriented exercise, students were taught how to dress as a soldier, how to fire a rifle, salute an officer and a variety of other military commands. The training was very thorough; the teachers used photographs of what an acceptable military stance and unacceptable and unacceptable military stance. The use of propaganda is also evident in the manual, they used nationalistic rhetoric and instilled a sense of nostalgia to emphasizes the importance of such rigorous training. Fear of losing that old world resilience is evident when the manual stated, “As a nation our citizens are beginning to lose the old pioneer hardness that characterized our grandfathers.”5 Students who were of high school age received most of this training. Even when one finally reached the sports section of physical education the manual clearly states that the athletics must serve a higher purpose.  The Board of Education Plan on Physical instruction stated that, “Their value lies entirely in their usefulness and the development of physical strength, endurance and skill and not in the making or breaking of records.”6 Sports lost their intended purpose from being competitive and victory oriented became another means for military readiness.

From a 1918 CT Board of Edu. teaching pamphlet teachers are told how to instruct their students to practice military position.

The thought of young boys being given military training in schools may seem strange and ludicrous by today’s standards, at the time there was sound logic behind it. Today, many nations the world over have a mandatory conscription policy; without serving in the military for a certain amount of time the individual is not allowed to keep his or her citizenship. The reasoning behind this mandatory conscription is based around an equalizing factor. If everyone serves in the military the decision to go to war is much more serious therefore there is a greater hesitation. There is a more serious reason why a country would consider conscription and mandatory military service; the country’s overall safety. Based on the push for military training in schools by the Connecticut Board of Education, it is clear that World War I America was greatly concerned with its preparedness for an oncoming military struggle. By having some degree of military training at the beginning of a student’s schooling it will eventually lead to everyone being prepared for a possible invasion rather than simply having a small percentage of the population serve as professional soldiers. Countries would not have  deficit of soldiers if its citizens were readily trained to fight. The United States was proud of the fact that it removed itself from the quarrels of Europe. Thanks to the encroachment of globalization the idea that hostel foreign nations could wage war on US soil became more apparent and realistic.