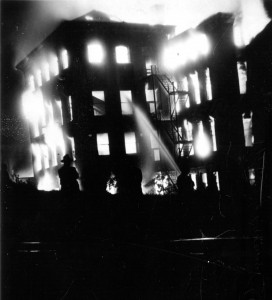 One event in Eastern’s history is so important that even though it occurred  25 years after the end of the Great War, it is imperative that it is discussed; that event is the Fire of ’43.
The  J. Eugene Smith Library at Eastern Connecticut State not only currently houses a wide variety of books and other source material, it acts as the intellectual center of Willimantic and Windham County. Since its creation individuals in the community have entrusted the library with the history of their town. People from all over the county have donated there heirlooms, diaries, notebooks, photos, and postcards to the library for preservation. For many years Eastern Connecticut State has had a caring staff that spends much of its time not only taking care of the artifacts of Willimantic but allowing its people to make a personal connection with the community’s history.

At 4pm on Sunday, August 29, 1943 a fire started that would shake the foundation of the school and town for generations.1 The college’s records were all stored in the main administration building, everything from student records as well as all the original copies of student teaching material. An estimated 60,000 volumes of teachers’ education materials were lost.2The fire’s destruction has ended up making it extremely difficult, if near impossible, for scholars to find material that chronicles the university’s past.

Luckily no one was injured in the fire; the building was completely devoid of all staff and students Sunday afternoon.3  Although no one was injured or killed in the blaze, if staff members had been there during the event, the fire would have been there during this event the fire would have been reported and probably contained much sooner. The official cause of the fire was never revealed.4
While the emotional toll of the fire was extreme the financial toll hit much harder. The financial burden the fire took on the college’s funds was in most people’s eyes seen as a crippling and possibly cataclysmic blow to the Town’s proud teacher’s school. The fire cost the college around $200,000 worth of damage.5

The books and manuscripts published relating to the history of Willimantic are extremely sparse when relating to the role of the university. Many of the texts that are published in the years following reference the fire as the primary reason why Willimantic has lost much of its early history.