The proud state university known as Eastern Connecticut State University owes its existence to humble origins. The school opened its door in September 1889 with a class of twenty.1 The school started out as a teachers’ college specifically educating future elementary teachers.2 The school developed slowly from a single story building to a full-fledged normal school. 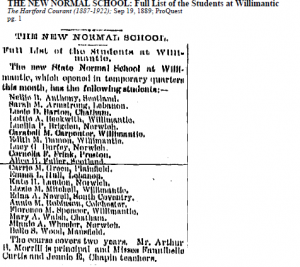 List of the initial students of the Willimantic Normal School.

A common trend during the early twentieth century among normal schools in Connecticut, as well as the rest of New England, was to become something more than just a normal school. The focus in the early twentieth century shifted to a drive for college recognition and eventually somewhere down the line university status. While the rest in the states of New England began the shift, Connecticut did not have any major intention to change the status-quo. With the fear of being left behind Connecticut had no choice but to begin prepping resources to help with the transition starting in the year 1905.3
During the early twentieth century the push for higher education and the increase in the overall population pushed the need for better-trained teachers throughout the state. According to Dr. Frost, author of a comprehensive history of the development of Eastern Connecticut State University, “between 1890 and 1930 the public school enrollments doubled.”4 With a greater number of children attending schools better trained teachers were needed to handle this increase in school children. The shift from normal school to state college was gradual and gained a much needed push from the increase in population and the oncoming issues that arose due to the Great War.
Students who attended Willimantic Normal School at the time,  came from a numerous towns all around the state of Connecticut. While it was easier for upper-class families to send their daughters across the state to attend a prestigious normal school most families could not afford the high-cost. Throughout the late nineteenth and early twentieth century Willimantic, as well as other surrounding towns, began to consider extending their teaching programs from two years for a certification of elementary education to a program that lasted longer and encompassed a more holistic view on education as a whole.5 Teachers were finally starting to get certified in high school as well as middle school.

3. Arthur Charles Forst Jr., “From Normal School to State College: the Growth and Development of Eastern Connecticut State College from 1889 to 1959.” (PhD diss., University of Connecticut, 1980), 88.